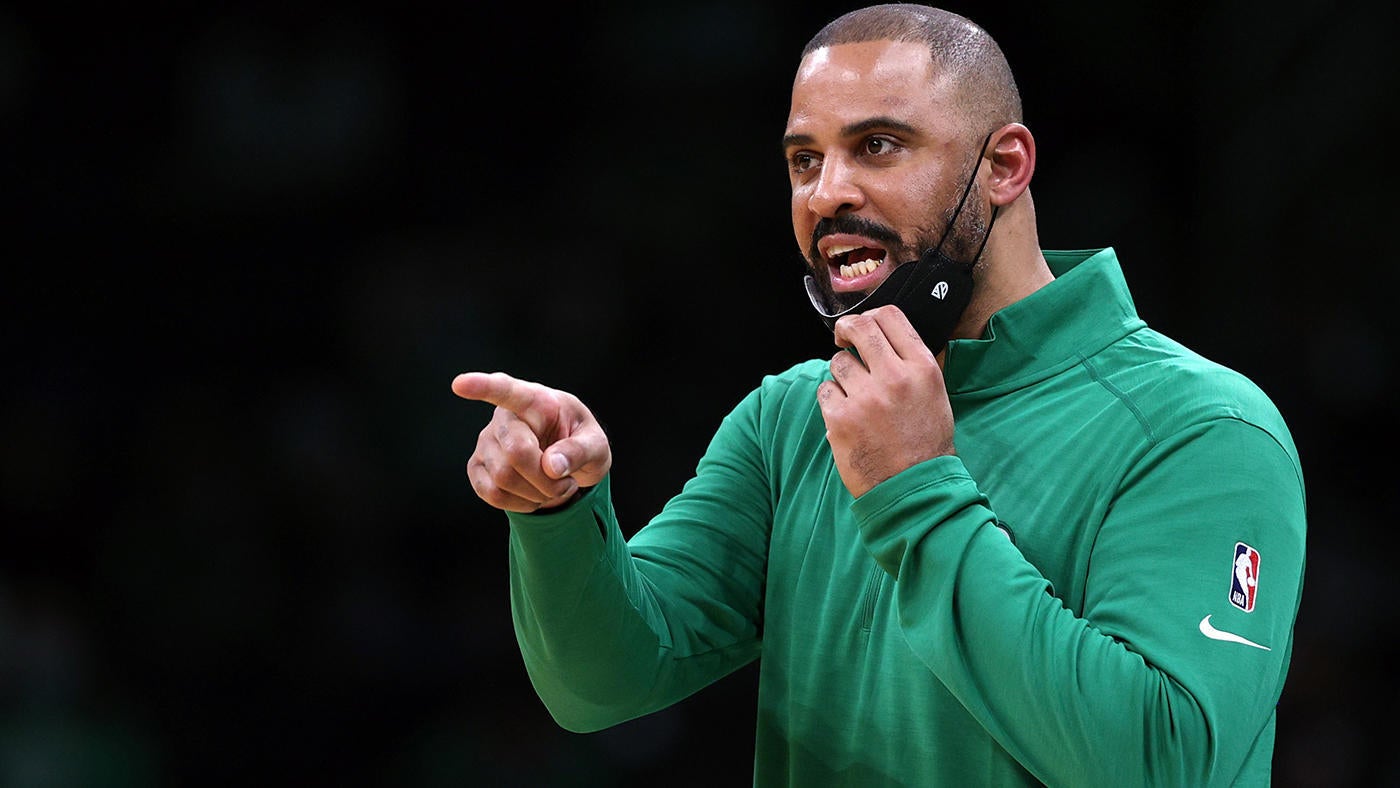 The 2022-23 NBA season is fast approaching. The first preseason game is Sept. 30, and the regular season begins less than a month later on Oct. 18. But first will be team media days, most of which are scheduled for Monday.

Often these are forced pressers and reporter scrums that saturate the Internet with recorded and overconfident quotes, but that doesn’t stop reporters from snooping. Of course, there will be some sticky questions that players, coaches and GMs will be expected to answer.

Here are six teams that don’t want to face the microphones.

Rob Belinka and Darwin Hamm already canceled their press conference scheduled for Tuesday. Some feel this foreshadows a trade in the coming days and the GM and coach are unwilling to officially address anything. Others think it’s a sly ploy to avoid some tough questions about what Belinka has, or hasn’t, done on this Lakers roster.

If the latter, Belinka can run but cannot hide. The Lakers’ media day is Monday, and sooner or later Belinka will have to talk to this Russell Westbrook-sized elephant in the room. Are the Lakers going to trade him? Did they get a chance to trade him already and be stingy with their future draft picks? They’re going to give him the John Wall treatment and pay him $47 million to stay at home?

Or, are they going to seriously backtrack on this abysmal failed experiment? So, is Darwin Hamm going to start Westbrook? Patrick Beverley — to say nothing of the well-known tension between these two — has a preference at point guard, as does newly signed Dennis Schroder. If Hamm starts calling Westbrook for optics and convincing the stubborn former star, who will get the call at the end?

It’s sticky, and at the very least, everyone in Laker land is going to hear about it. LeBron. Anthony Davis. Belinga. Ham. Perhaps most combustible, though, is Westbrook himself. Westbrook isn’t going to be happy about his game being dragged through the mud this season. He addressed the verbal abuse his family took at games last season, and now his wife has posted the following message on Instagram — which certainly sounds like a thinly veiled shot at the Lakers.

These questions won’t stop after media day until Westbrook is traded or sent home. That would be the beginning.

It’s hot off the press. Wednesday night Adrian Wojnarowski of ESPN Celtics coach Ime Udoka has announced that he faces disciplinary action that could include a significant suspension for violating an unspecified organizational guideline. Just in time for Media Day, it’s a gift-wrapped play to probe the mind.

What did Udoka do? How bad was it? A “significant” suspension certainly gets the imagination going. According to Wojnarowski, Udoka’s job is not believed to be in jeopardy at this point, but could that change? It’s a coach and team coming into media day two wins away from an NBA championship. On the contrary, it Maybe a question or two for Jaylen Brown and how he feels about being left hanging on the Kevin Durant trade plan.

You’d like to think Sean Marks and Steve Nash are professionals, but they’re human too. No one wants to hear their star player call for their head. But that’s exactly what Kevin Durant did in a last-ditch effort to lure Brooklyn into a trade. Fire Marks and Nash, or I’m out. It didn’t work. Durant is still in Brooklyn. So are Marx and Nash. The company line offered by Marx is that everyone has “agreed to move forward” with “a common goal”.

Let’s see about that.

Meanwhile, Durant, Nash, Marks and probably all the rest of the Nets will have to answer questions about this summer’s drama, which didn’t end with Durant’s trade request, didn’t, and then failed. beat on his “bosses”.

There’s also a distraction/Hall of Fame player named Kyrie Irving. The Nets were in talks to trade him. They probably would have moved Durant. Marks didn’t shy away from Irving’s media jabs, saying at the end-of-season press conference that the Nets were looking for players who were “going to be available,” a claim Irving didn’t substantiate. Terrible curiosity.

Oh, and don’t forget Ben Simmons. Left Philadelphia and didn’t play a single game for the Nets last season, he was reportedly set to play in Game 4 of Brooklyn’s first-round loss to Boston, but ultimately left. min.

Yeah, something tells me the Nets want this media day to end in a New York minute.

Things got a lot easier for the Suns after it was announced Wednesday that owner Robert Sarver, who was recently suspended for a year and fined $10 million by the NBA, has begun the process following the conclusion of his inappropriate workplace misconduct investigation. Selling the team.

Ahead of the news of Server’s intention to sell, Chris Paul was quick to respond to the league’s ruling, saying, Tweeting That punishment “fell short of truly dealing with atrocious behavior that we can all agree was wrong.”

Paul will have an easier time at media day because he’s already recorded his thoughts, but he, along with everyone else in the company, will still have to deal with being asked about it if they find him in front of a microphone. The Suns’ (soon-to-be-former) misogynist, racist and downright regretful owner instead began the process of turning their attention back to basketball in what everyone hoped would be another season featuring a championship-contest run.

There is also the Deandre Ayton situation. After already choosing not to extend his rookie contract last summer, the Suns were very clearly looking to trade him. But then Phoenix offered Ayton a four-year, $133 million contract.

Ayton can still be traded this offseason, but not before Jan. 15, and has a one-year no-trade clause that must be to a team of his choosing. There will be questions about the situation, how it dragged out, how Ayden feels about being mired in trade rumors, and everybody’s going to say the right things — it’s a business, and everybody’s eager to get back to business. Chasing a championship, and that wouldn’t be too bad. Server messages in particular are now front and center.

Like the Suns with Ayton, the Knicks have R.J. Barrett appears to have been paid. Trading Barrett to the Jazz as part of the Donovan Mitchell package was widely reported as their first priority, according to Steve Berman of the New York Post. reported Even if the Knicks were able to land Mitchell without including Barrett in that deal, they wouldn’t have paid Barrett until at least the October deadline, waiting until their hand is truly forced in restricted free agency next summer.

The picture Berman paints is that the Knicks felt pressured to make some kind of splash move after striking a Mitchell trade, and a four-year, $120 million Barrett extension, perhaps regrettable.

This is the key line from Berman’s source: …”[the Knicks] RJ Like, but he’s not one of their guys.”

As with the Ayton situation in Phoenix, when the inevitable questions are asked about Barrett’s extension and how the Knicks want to trade him, chances are everyone will toe the company line, but you still don’t have to dance around the worst answer.

Barrett isn’t the only one to be shipped out in the Mitchell deal. Obi Toppin is said to be included in the proposed package. Earlier reports indicated that the Knicks were willing to trade Emmanuel Quigley, but when Utah faced Quentin Grimes to replace Quigley, New York backed out. How does Quigley feel about that?

Yes, everyone is a professional, and being offered in a trade for a player of Mitchell’s caliber isn’t exactly a slap in the face, but it’s never ideal to come to media day and answer questions about how. Your team tried to abandon you.

Mostly, Monday’s media day will be a celebration of the Warriors winning the 2022 title and bringing back the core of the team that did so. But how long will that core last? Starting with Jordan Poole, who is eligible to sign a new contract until Oct. 18, the Warriors will have some tough contract decisions to make over the next two summers.

If the Warriors don’t give Poole that extension, or if it’s short and Poole doesn’t sign, he’ll become a restricted free agent next season, at which point the Warriors must pay him or lose him. It’s tricky because Andrew Wiggins is also a free agent next summer. The same goes for Draymond Green, who will decline his 2023-24 player option to receive another big-money long-term deal. Then, in the summer of 2025, Klay Thompson will be a paying agent.

The Warriors have made it clear that there is a limit to how much they can spend, and if it comes down to these tough choices, who are they going to choose? Poole or Wiggins? If both, would they let Draymond walk after he’s done for the franchise? Will they trade him before it arrives?

The pool result is the first domino here. Bob Myers is going to hear about it. Poole is going to ask about that, as he has some incentive to keep his 2023 free agency status intact with the possibility of playing on a bigger contract this offseason, bypassing Golden State’s max offer.

These are definitely first world problems. The Warriors have participated in six of the last eight championships, winning four. Having so many good players worth a lot of money and only having that money to go around is a good dilemma to face. Still, it’s a dilemma, and the Warriors will begin a year of facing these questions at media day on Monday.

I want a team in Las Vegas

Joe Castiglione Hall of Fame’s Ford C. A finalist for the Frick Award